A downloadable game for Windows and macOS

This is not a serious game. Currently 11.5 endings with 10 different ending cards.

In case you want an idea of what exactly you can date, take a look at this post... (spoilers)

I FUCKING LOVE YOUR GAME, THANKS FOR MAKING MY INSOMNIA BETTER

(okey amm first for all english isin't my language)

i don't usually put comments in games BUT, THIS GAME WAS AMASING JSKSJAK THIS GAME REALLY MADE ME LAUGHT AND I LOVE THE PART WEN SAYS "congratulations your a idiot, now watch 3 hours of (i really dont remeber very well what that saying) I WAS TRAYING TO SEE ALL FINALS AND AS A TRANS MAN REALLY LOVE THAT, THIS GAME BECOME ONE OF MY FAVORITES!!

I wasn't frustrated but was laughing a lot during breaking the 4th wall. Teresa best girl lol.

im pissed but also laughing at the fact i cant actually date zane, lmao i love this game

I did all of the 3 protagonists but now I'm curious to romance everyone sans them hehe, it's a fun game and I wasn't that offended more like I was amused by the antics. Gotta admit all of them are my favorite but Sammy has a soft spot for me. Love the game!

I got 9/10 endings, but I accidently pushed the quit button now I'm sad ;(

but overall, I really like this game the Sammy end was probably my favorite

NEVER MIND I HAVE FOUND THEM HEHE IM SO HAPPY

A 6/10 for me even though I did enjoy it, dialogue became repetitive for the 3 main routes (the customers). I honestly LOVED the 4th wall breaks and how goofy the choices and responses were.  Pursued all the routes (even the secret ones ;)) and had fun with the trolling.

Things to look out for:

A very quick witty game for an easy laugh, but don't expect the story to delve in deep.  Personally, I wasn't offended & took it lightly(even though it did apply to me)  but there are some dialogues that aren't exactly good for people with issues w/ mental health. (If you are very sensitive to that topic then this isn't for you). Contains satire humour too.

The DLC had transparent character sprites, what does that mean)

Here's my opinion on this game

It's really well made. The art is beautiful, it's funny too. But it isn't a dating simulator, the description even says to not go into it taking it seriously. Obviously that should mean that none of the "routes" are actual routes. In my opinion...I think it's kind of dumb to get mad at a game, that's clearly satire, for being satire just because you have mental issues. I have mental issues too, not to get personal, but this game did not peeve me in any way. Do not go into this expecting an actual dating simulator or you'll be disappointed. I do think this game shouldn't have been listed in the dating simulator tag, but if you take one minute to read the description you'll realize it's not serious. Just saying.

Anyways nice game developers, I really like it in all seriousness.

this is a really silly game! i dont really get why everyone else finds it upsetting, maybe because i wasn't taking it seriously at all from the start, but people have their opinions and thats valid!!
i love the art and the characters, sheldon is really funny and sammy seems very nice. and the calluna stuff really caught me off guard in a Very good way, very nice game :)

I have never enjoyed being edged less.

I thought it was an ordinary dating sim, but when I tried the Sheldon route first, talk to him and make coffee stuff, I was surprised. I didn't expect those dialogues. It was like being sarcastic and then at the end of it, there would be words that they love you. welp, I also tried other routes. those sarcastic or whatever won't stop meh from getting all the ending! Why put math lecture QAQ I was in the mid of my class meeting xD

This game is not suited for those people who had mental issues and weak hearts.

My name is Lina, I'm a team leader of a russian fan made group "VNka": https://vk.com/vnkavk

We translate japanese and english visual novels to russian.

Our group have many finished projects: https://vndb.org/p11146

I really like your otome novel "Date (Almost) Anything Sim".

Could you possibly give us permission to translate it into russian?

At first I genuinely enjoyed the joke and I wanted to explore more endings, but then it just made me feel like every choice I make is a mistake, which is discouraging. I've only seen 3 endings so maybe the rest is actually nice but I just lost my motivation to continue playing.  For new players, maybe it's worthwhile to read some of the comments below before you start playing because I regret not doing so myself.

this was hilarious!! thank you <3

Full review below with likes and dislikes, but TLDR: the game tags and/or game page needs to give people a better idea of what they're playing.

That was... strange. The beginning of the grand speech was humorous and refreshing, I quite liked it. It was unexpected and a little snarky. As it went on, some of it was nice and thoughtful, like a good friend motivating you to make the most of your life and go get what you deserve!

But as it went on, the sarcasm switched from funny, to derisive and aggressive. It's like getting on the metro, minding your own business, only for some judgemental old man on the metro to launch, unprovoked, into an extensive (and oddly specific?) sermon. He doesn't know the first thing about you, but he's got a chip on his shoulder that makes him feel qualified to tell you all about your own life and all the ways you're doing it wrong, all because of... the kind of book that you pulled out of your backpack. Or because you're playing Tetris on your phone.

To someone like me, that's simply annoying to put up with, but to many people in the comments, it was actually hurtful. If that many people are negatively affected by what was supposed to be a fun experience, there's a problem.

Still! Many people in the comments enjoyed and appreciated this game too, so the problem isn't the message or tone of the game itself; it's the lack of proper tagging or other indication of the content in the game. Variety is good! Options and twists and different kinds of humor and tough love are all good to have -- just please mark your content appropriately, so that the people that it isn't good for aren't tricked into consuming something very different than what they actually signed up for. Unfortunately, a warning for strong language and "this is not a serious game" does not tell people enough.

(I hope I broke up the review into easy to read and follow chunks without too much redundancy; I personally struggle to read bland or rambling walls of text so I try to avoid that kind of thing for others with the same problem.)

Had to delete it on the first route. This game while great should also be labeled as not a dating sim. So yeah if you're looking for a dating sim to have a laugh and just have fun DO NOT download this! Especially if you have mental issues TRUST ME!!

this was so much fun!! the math video made me want to cry tho </3

yeah i'm not sure if i'll be fine anymore.

noo i was looking forward to your confession creator-san ;-;

(i really enjoyed the game :D)

This isn't enjoyable for the reasons dating sims are enjoyable.  I guess this hits some people's sense of humor, or maybe you like to be surprised, but if you are looking for a dating sim I would look elsewhere.  I game to deal with mental illness, and being lectured on why I was playing a game/wasting my time was weird and saddening.  I don't recommend it.

hi, i really like this game. i played it a while ago, and i still think about it on a regular basis. i just wanted to say thank you for making it :-)  i definitely understand what some of the other reviews are saying, but i really did enjoy getting all of the endings even if the game hurt my feelings a bit by the end :-)

this game got me confused on the drinks- but everything else is great! Sometimes i wish you could spend more time with the characters or something but awesome game!

Wow, That was a bit shit.

cool game i liked it a lot! I wish there were  more interactions though (i just wanted more time with my man sheldon T_T)

I'm disappointed and  confused. Lemme just deleteus the game like you guys said.

I actually feel great after finishing my first route. I'm a huge fan of games like "The Stanley Parable" where the game plays with your emotions and "your decisions don't matter" and I it gave me similar vibes. I'm looking forward to play more of your games and I hope more people can see the potential I see on your work :D

A lot of effort put into a game written to make you feel bad about playing games.

I was a bit sad, I wanted to date Zane but the concept of this game is pretty cool with the secret endings.

I know a lot of people are salty about the ending and hating on the game just for it but I enjoyed most of the game (although I have a bad memory). The ending basically felt like getting slapped and then being given ice cream with "Go do something better" and then saying that the character loves you. It made me cry and I'm not entirely sure if it was because if I was sad or happy. I overall love the game and I'm not too salty about the ending.

the fun ending has me roLLING xD omgg

i played and the when she got really close to the screen i was like 0.O

Just the trailer is GREAT(haven't played the game yet) 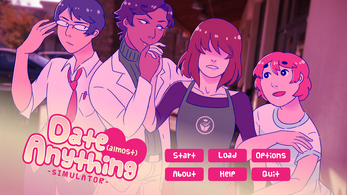 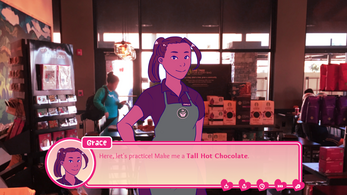 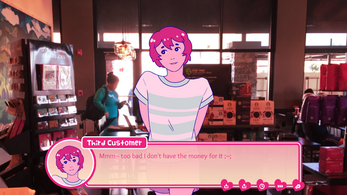 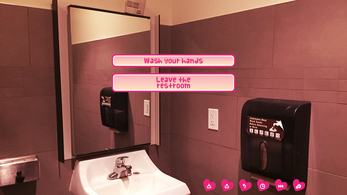 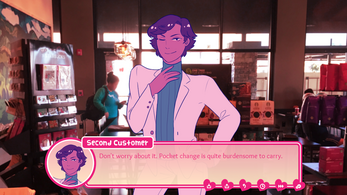 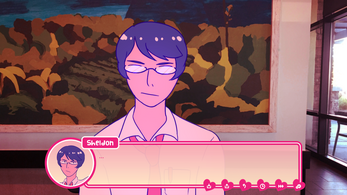